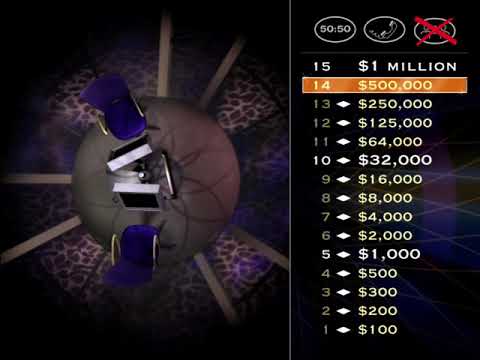 If ever there were a period piece of early 2000s television, Who Wants to Be a Millionaire was that incarnate for game shows of the time. You all know the show by this point, and in fact it’s one of my earliest TV memories that doesn’t involve PBS. Of course, I was so young at the time that I didn’t know an ounce of even the 100 dollar questions, but a lot of things about it stuck with me — the dramatic lighting, the dark and foreboding music, all the sounds you heard, “final answer”, lifelines…indeed, it was a ratings behemoth for several years and was a big trendsetter, for better or worse, on game shows to come, such as the aforementioned dramatic environment, trivia questions, lifeline equivilants, super slow pacing, and extremely prestigious top-dollar prizes. With a show as popular as this, it’s pretty much inevitable it’d get a video game adaptation, and I figured doing a video of it was a good way to pay tribute to Regis Philbin, which as suggested from that first line has only recently passed away as of this posting (in fact, by sheer coincidence I first tried this game on the day of his passing, as you may note in the high score list…talk about timing).

The game is exactly as you expect, but for those who may be too young to remember this show, the format is as follows — you are presented with a multiple-choice trivia question. Answer it correctly, and you win the next tier cash prize. There are fifteen questions in total, and the top prize is — what else? — one million dollars. However, if you mess up on even one question, the game is over, and you will either walk away with nothing, the fifth-tier prize, or the tenth-tier prize, if you reached either one. Or you can choose to take what you have if you don’t want to take any risks (which is kind of pointless in this game since no real money is involved so why not just try to go as far as you can anyway? Sure, you won’t hit the high score list, but does that really mean anything?). If you’re stuck, you can also use a lifeline to potentially aid you in answering the question, but you only get one use of each of the three, so use them wisely.

So let me just say this right now, I absolutely cheated my way through this game. Oh come on, don’t act like you’re surprised, if you were doing a video on this and needed to show off winning the top prize you’d do it too. And besides that, it’s no secret that I am absolutely horrible at trivia. In fact, I’m bad enough that I’ve even messed up some of the first questions on this game (though it’s not always guaranteed to be kindergarten-simple, in my defense). So yeah, I basically had my phone on stand by to look up answers while I played. I did make sure to use the lifelines at least once so you could see what they were like, and since this would have been very short if all I showed was one perfect run, I also showed a few more odds and ends they included as part of the package. Some of them are pretty funny (hey, it is Regis Philbin after all!), so stick around!

Hope you enjoy the video!

All copyright belongs to their respectful owners.

Tag: game who wants to be a millionaire, [vid_tags]